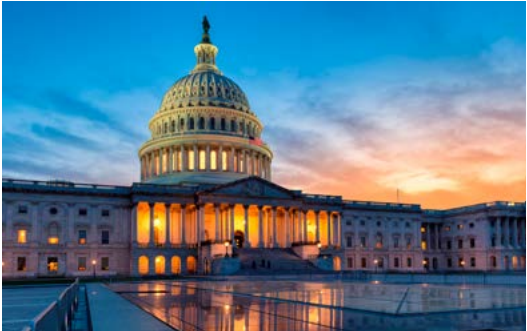 August is usually a quiet month on Capitol Hill, as Congress adjourns from session for its annual summer district work period. Representatives and Senators typically head back to their districts for constituent meetings, town halls, and loads of casework requests and projects.

This August however, it’s been anything but quiet, as both the House and Senate pushed forward with a legislative package pursuing key domestic priorities, particularly related to addressing climate change and economic issues.

Titled the Inflation Reduction Act of 2022 (IRA), the bill invests hundreds of billions into renewable, clean energy projects to fight climate change, lowering health care costs, and making corporations pay their fair share in taxes. It is widely considered to be the largest climate investment by Congress in U.S. history.

Following House passage on August 12, President Biden was expected to sign the bill into law within a week. NFU strongly supports this landmark legislation and looks forward to ensuring proper implementation over the next several years.

LEGISLATIVE BREAKDOWN: BEHIND THE SCENES AND IN THE WEEDS

On July 27, Senate Majority Leader Chuck Schumer (D-NY) and Senator Joe Manchin (D-WV) issued a joint statement announcing a deal reviving Senate Democrats’ efforts to pass a social spending bill, through the budget reconciliation process, which allows the Senate to pass legislation through a majority vote without the threat of a filibuster. This process sunsets most provisions after 10 years and requires the legislation to make budgetary changes.

This legislative process began with a social spending and safety net framework, central to President Biden’s domestic agenda, known as “Build Back Better” (BBB), which NFU supported when it was first proposed. The White House proposal was marked at roughly $3.5 trillion, but the first Senate version was put forward at about $1.75 trillion. In November 2021, the U.S. House passed its version of Build Back Better, at around $2.2 trillion. Prospects for BBB were dashed in late December 2021 when Senator Manchin announced his opposition, due to concerns about rising inflation.

What followed over the next seven months were intense negotiations between Senate Democrats to come to an agreement on passing some of the legislative provisions from BBB. Negotiators kept details largely out of public view, and a period of soaring prices and conflict overseas presented major obstacles. Despite this, NFU remained committed to its policy priorities – including how farmers and ranchers can be part of the solution to addressing climate change.

The bill will be funded by roughly $740 billion in new revenues over the next 10 years, imposing a 15% corporate minimum tax, imposing a small excise tax on corporate stock buybacks, and stronger IRS enforcement measures. The Congressional Budget Office recently estimated the bill will raise revenues and reduce the deficit, easing inflationary pressures.

A BOOST FOR CLIMATE-FRIENDLY AGRICULTURE AND RENEWABLE ENERGY

Key agriculture provisions in the IRA which total about $40 billion over 10 years.

· $300 million for NRCS to carry out a carbon sequestration and GHG emissions quantification program.

· $1 billion for the cost of loans under the Rural Electrification Act of 1936 by the USDA RUS; the loans are for electric generation from renewable energy (solar, wind, hydropower, biomass, or geothermal) for resale to rural and nonrural residents.

· Nearly $2 billion for the Rural Energy for America Program (REAP), and the grant limit was raised to not more than 50 percent of project cost (eligible entities are rural small businesses and agricultural producers).

· $500 million for biofuel infrastructure; grants with up to 75 percent cost share to fund infrastructure improvements for blending, storing, supplying, or distributing biofuels.

In March 2021, the American Rescue Plan Act (ARPA) established a debt relief program for Black and minority farmers, attempting to reverse decades of discrimination by the USDA. It

authorized the USDA to offer payments worth 120 percent of a minority farmers’ loan balance, but this program has been blocked by federal courts.

The IRA scraps the stalled ARPA program and creates a new debt relief program, adding new funding to support underserved farmers, ranchers, and foresters. This includes a new debt relief program with $3.1 billion for aid to distressed holders of Farm Service Agency direct and guaranteed loans. It also designates $2.2 billion for payments of up to $500,000 each to farmers who “experienced discrimination” prior to Jan. 1, 2021, in USDA farm lending programs.

FINAL PASSAGE AND THE ROAD AHEAD

The Senate voted 50-50 on final passage in the late afternoon on August 7. Vice President Kamala Harris presided over the session and cast the tiebreaking vote in favor of the IRA, to conclude a nearly 30-hour long session of debate and votes on amendments, also known as a “vote-a-rama.” The following week, the House of Representatives returned and passed the bill, by a largely party-line vote of 220-207.

Because this bill was passed through the budget reconciliation process, there will likely be attempts to rescind or repurpose some of these funds. The funding in agriculture committee jurisdiction might be able to be used in the 2023 Farm Bill. This could provide more flexibility for writing the next farm bill, and NFU will closely monitor the implementation process for the IRA.