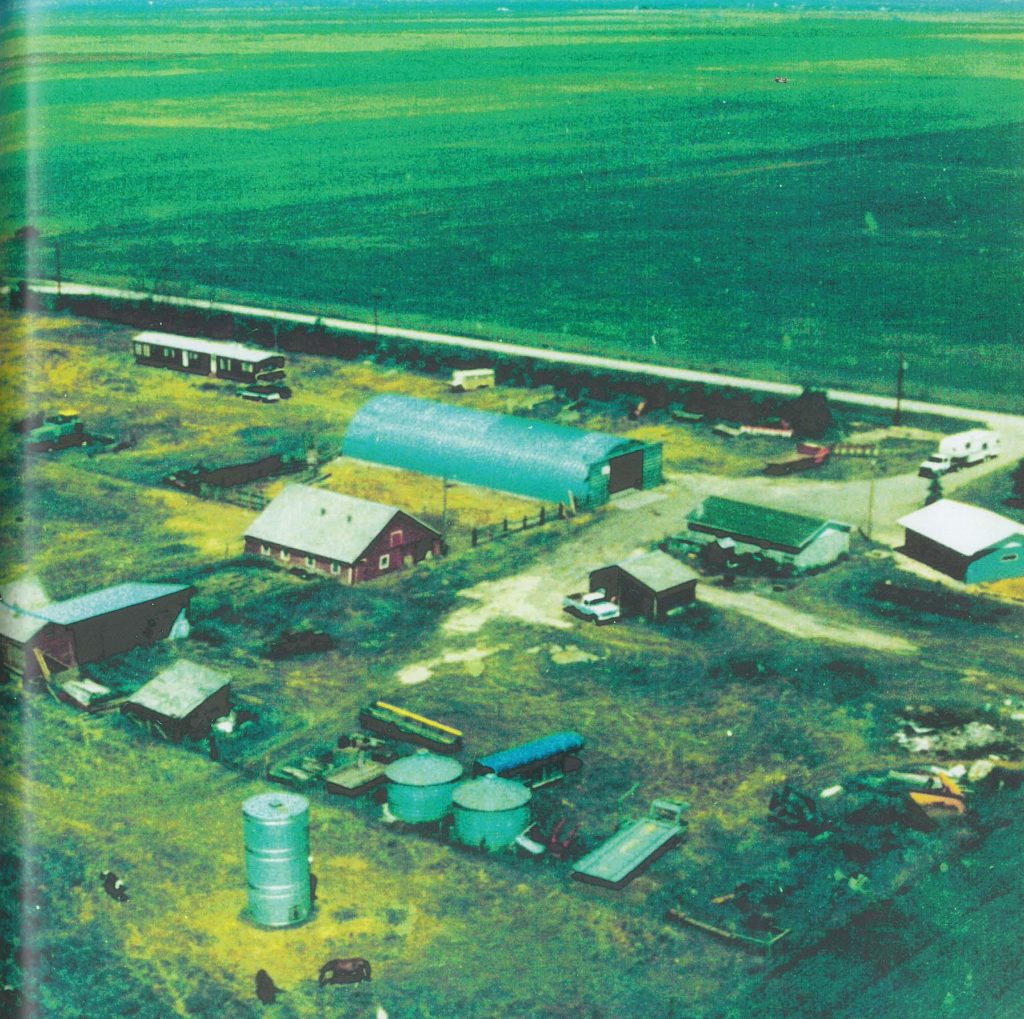 Earlier this summer, the Hertel family threw a big party to commemorate their ranch’s centennial. They celebrated the milestone again at the 2021 state convention as part of MFU’s Centennial Farm and Ranch Awards.

It all began 100 years ago when Delta Hertel moved to Montana from Illinois with her three young children to cook on a ranch alongside her brother. Delta’s path forward laid the foundation for what would be a century of ranching near Moore.

Delta’s first husband, George, passed away before she and her children moved to Montana. In 1924 Delta and her new husband Tex Bella began a life on the property that is now the Hertel Ranch.

During those first years, the family struggled through the depression. The family lost the house to the bank; however, they successfully repurchased the property with lots of hard work. In December 1944, Max Hertel made the last payment to the property owner and purchased the 440-acre ranch for about $10 an acre. The ranch was passed down from generation to generation. Eventually, Karl and Marion Hertel assumed operation of the ranch. And now Karl’s son Colby and grandson Max primarily run the ranch. Over the years, Karl’s father Max purchased property near the original ranch and expanded across the Moore Bench. “I grew up farming with my dad until I got out of high school, then I spent six years before I came back from going to college and so on,” said Karl. “When I came back, my dad and I farmed together; then we started to expand some more. In about ‘63, he bought what we call the Keeney Place. There were 1,200 acres in that. It’s got a nice big home on it, a lot of farmland on the Moore bench. So it’s a key addition to our ranch now. I live here, and my son lives up there on the hill in the original homestead place.”

The Hertels are legacy Farmers Union members. Karl’s dad Max was instrumental in keeping the Moore Farmers Union Oil Company going. Karl was a camp counselor at Farmers Union’s Arrowpeak Camp in the Highwoods. Karl also represented MFU at the Encampment for Citizenship in Berkeley, California, an educational summer project for youth. “After I attended that encampment, I decided, ‘You know I think I need to get an education.’ It helped round out my education a bit. I went back to school, and I stayed with it and graduated.”

Karl and Marion began raising Hereford cattle.” I was probably one of the first that got black bulls in the area and started crossing them with Herefords. That made a good cross; we were pleased with the black bulls. Then in the early ’70s, Simmental was introduced. It was at this time that I learned the method of artificial insemination. Our yearlings did well. I think I had heavier calves than anybody in the whole area for a long time until they realized that they needed to start doing some crossing and upgrade their cattle herds. I was right on the ground floor of that.” Now the Hertels raise primarily Black Angus, wheat, barley, and hay. They also do custom cutting.

In the 80’s Karl saw many farmers and ranchers go out of business, but the Hertel Ranch stood firm. He attributes this success to being fiscally conservative. “We had enough money to make it through the ’80s. I didn’t want to pay that high interest, so I got rid of some land to compensate. We just worked hard and didn’t spend. A lot of ranchers had to have new equipment. You could do a lot of farming, but you don’t need the fanciest tractor to get your work done. On a smaller farm, you can’t afford to over-extend. Now even the big farms, unless they’re really big, they can’t afford it either.”

Karl says another key to the ranch’s success is keeping up with technology, which he admits is now more in his son’s wheelhouse. But he did make one major upgrade that has proved to be quite successful over the years. “In 1980, I had an irrigation system put in, and then here about four or five years ago a brand new setup. We put a lot of money into it. We are getting the water that comes out of Crystal Lake. Investing in technology was well worth it and a must to keep up with the times.”

Karl feels confident about the future with his son and grandson at the helm. “I feel good about celebrating a century on the ranch. I don’t think there are too many ranches that make 100 years. So I’m proud; I shouldn’t just say maybe I did things right or brag about it. But we made it, and there’s one, two, three, or four other ranches here in our area that have been here 100 years.”

As for advice on passing a ranch down successfully to the next generation, Karl said the key is to compromise. “If you’re going to be successful and keep your family on the farm, you’ve got to let your kids make a few mistakes. My son didn’t want anything to do with selling grain, so I did most of it for several years. Then I said, ‘Now you’ve got to just start doing it.’ He’s done pretty well and is doing the same thing with his son. I give him a chance to express how he wants to do it, and he will probably make a few mistakes. I think it’s important if you’re going to get along, that you’ve got to try a few things and sometimes they’re right and you’re wrong and vice versa.”