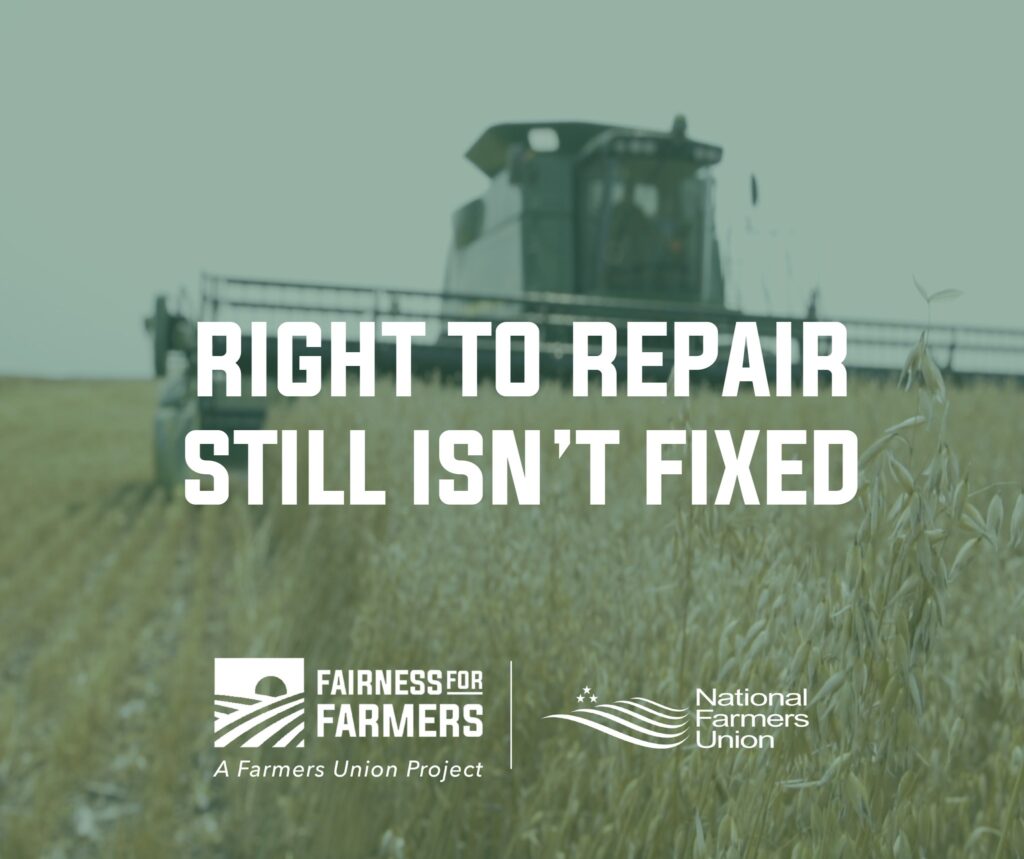 A recently announced MOU between the American Farm Bureau Federation and John Deere falls short of guaranteeing producers the right to repair their equipment.

“I am encouraged that John Deere is worried enough about their image that they are launching this media blitz – even if it is misleading. John Deere realizes that farmers and the public want to have the right to repair, but the concessions they have made in the most recent MOU aren’t enough,” Montana Farmers Union President Walter Schweitzer said.

The agreement comes as John Deere faces scrutiny from the Federal Trade Commission and public opinion on whether or not they unlawfully force farmers to pay a dealer when their equipment needs repairs. Deere is at the center of a FTC complaint filed by National Farmers Union, Montana Farmers Union and others alleging just that.

The Biden Administration has instructed the FTC to enforce consumers’ right to repair, and Deere would be forced into providing right to repair if the Agricultural Right to Repair Act introduced by U.S. Senator Jon Tester, D-Mont., is passed. At the state level, MFU is currently working with legislators, including Tom France, Willis Curdy and Josh Kassmier, on drafting comprehensive right to repair legislation.

Schweitzer pointed out that Deere failed to adhere to a MOU made in 2018 that increased farmers’ right to repair but, like the current MOU, fell short of fully guaranteeing it. He called the current MOU a “distraction” to disarm proponents of right to repair and ease the mounting national pressure for Deere without fully rectifying the issue.

“Clearly the MOU is meaningless because there’s no enforcement of the agreement in the language, and precedence has shown that John Deere doesn’t honor similar MOUs,” Schweitzer said.

The newly signed MOU provides that farmers and independent technicians have access to manuals, diagnostic tools and training – for a “fair and reasonable” cost.

“What might be a reasonable cost to a multi-billion dollar corporation could be significantly higher than it is for a farmer who is trying to pay off the debt on a piece of equipment they’ve purchased from John Deere,” Schweitzer said.

In return, farmers and technicians agree not to divulge trade secrets, proprietary or confidential information, override safety features or emissions controls or to adjust Agricultural Equipment power levels, or violate any federal, state, or local laws or regulations.

The MOU fails to ensure producers will be able to program new parts to communicate with onboard computers, meaning producers will still have to rely solely on John Deere technicians to get equipment back to 100-percent function.

Alarmingly, the MOU specifies that AFBF can neither introduce nor support legislation related to right to repair.