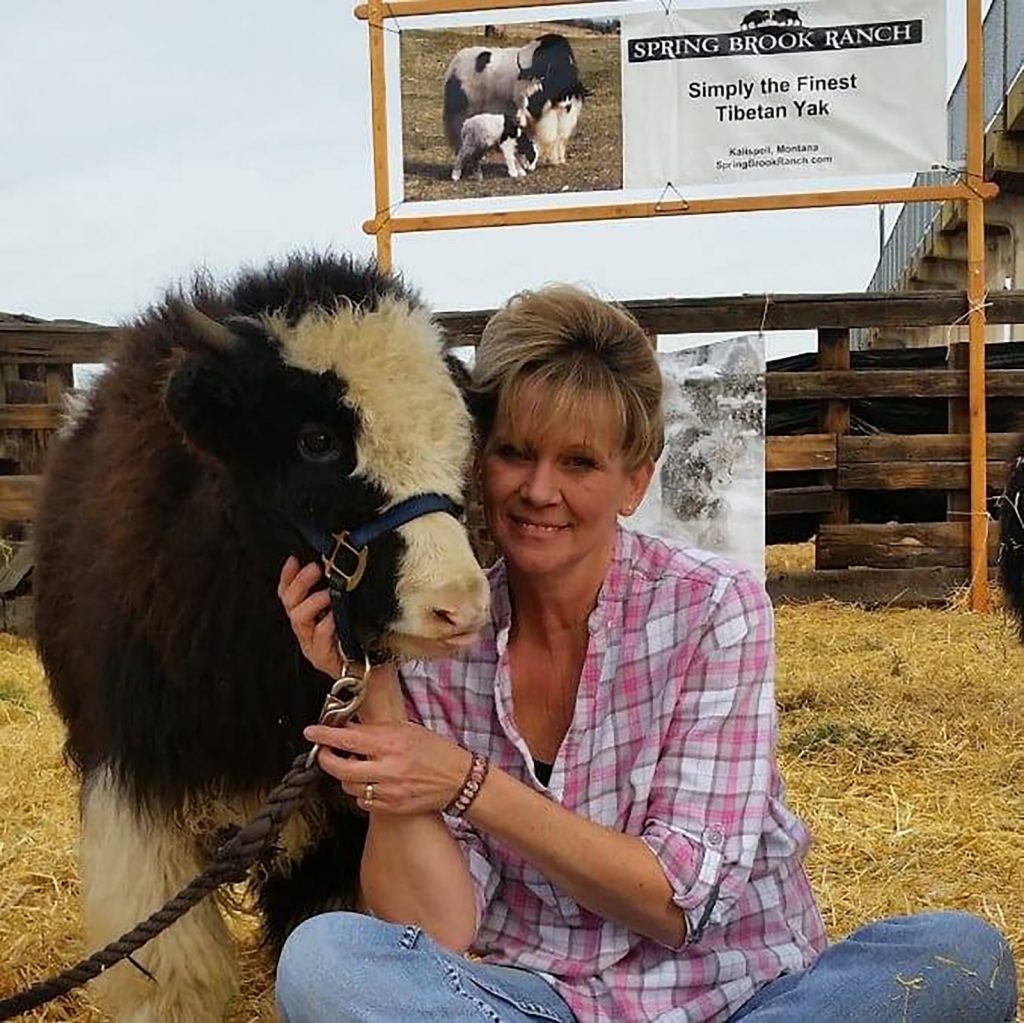 Where in Montana can you find a Tibetan Yak and a resident camel? Nestled near Kalispell is Spring Brook Yak Ranch, home to Tibetan yak, horses and Carlos the Camel. Jim and Carol Watson own the 1,000 acre ranch which is under a permanent conservation easement with the Montana Land Reliance. The Watsons received Carlos the camel in a trade for a yak heifer and bull from a ranch in Colorado. Christy Novak is the rancher manager and lives on the property. Spring Brook Ranch produces national champion show stock, fiber, pack stock and meat stock. The yak are raised as high-end breeding stock for other yak breeders. Jim grew up on a ranch in Mississippi. He moved to Bozeman in the 1980’s to work as a mechanical engineer. The ranch was originally started by Carol’s parents with mostly bison. When Carol’s parents passed away they took over the operation. Jim Watson said his background in agriculture has come in handy. “We have learned a lot by trial and error and much of it is standard cattle animal husbandry,” said Watson. “Nutrition of the animal is very important. With each animal we slaughter we take liver samples to give us a greater understanding of the nutrition program we should be following.”

Montana makes for an ideal environment for yaks because the higher altitude accommodates the yak’s lung capacity. They survive at 14,000 feet in the mountains of Tibet and need a good cold winter to flourish. They can stand heat as long as the climate is dry. There are less than a handful of yak breeders in Montana. The highest concentration of yak breeders is in Colorado because of its close proximity to the nation’s largest stock show in Denver. Novak says what differentiates yaks from beef cattle is their personality. “They are so much smarter than cows. That gives them a rich personality. They are as tame as you want to make them. When the yak cows develop trust they pass that on to the calves.”

A Knack for Science and Genetics

Not only does Spring Brook Ranch breed high-end stock, they also pride themselves on their studies of yak genetics. Their primary customers are in North America, with business expanding in Alaska. Their artificial insemination program is robust. “We have gotten quite good at it. For instance in Alaska they haven’t had new genetics in many decades. Shipping semen to Alaska has resulted in five bulls.

Spring Brook Ranch strives for more of a bison conformation. Novak said they focus their genetics on breeding yaks with docility which comes down to strong bloodlines and good genetics. Secondly, is good conformation. “Our yaks tend to be 100 to 200 pounds larger than the typical yak. We like big stocky shoulders, a heavy bottom,a really strong back and good spring of rib. It’s also important their legs aren’t too straight as they are mountain cows. If their legs are too straight it can make breeding more challenging.” Nutrition is a very important aspect of raising yaks. Novak said it’s important to regularly sample soil and water. She has heard of yaks that despite having access to knee deep grass in California because of the clay type soil they were starving to death. The yaks eat native range and local hay in the winter which comes off an organic farm. “This fits in with the story of our local customers,” said Watson. “They don’t want anything artificial and our customers trust us to do the right thing.”

Watson said the industry has changed in recent years. Their business for high-end breeding has dried up. “One of their primary focuses is selling the meat which Watson said tastes much like bison. Yak meat is packed with protein and very lean.

Like many others COVID hit the business pretty hard. “It killed our meat market for a time with restaurants shutting down and people not willing to pay a premium for our product. We continued to butcher and donate to the food banks and Blackfeet Tribe.”

Watson said they are starting to see things take a turn for the better. They sell their meat to a few area restaurants and two small grocery stores in Kalispell. Watson recommends the short ribs. They also make nitrate and MSG free sausage. “It gives our restaurants an opportunity to upsell to something different,” said Watson. “We focus on quality versus quantity.”

“I start out by questioning why they want yaks,” said Watson. “Someone who wants a fiber animal for hand spinning is going to want a very different phenotype than someone who wants strictly a meat animal. Some just want pasture pets. We have an opportunity to choose our customers wisely.” Novak said facility and land are important if a person is going to raise yaks. “They don’t do well in a penned in stall.” Said Novak. “They are range and grazing animals. They need room. They are so multi-purpose. You can plow with them and ride them. Every part of the meat is useable and of course there is the fiber component.”

Social media has helped with the education of the yak breed. Novak started the Facebook page Yak 101. “I started it six years ago and have over 2,000 members. People from all over the world responding to different situations. Whether it be minerals, nutrition, calving, fencing or grazing. It covers everything from hoof to horn.”