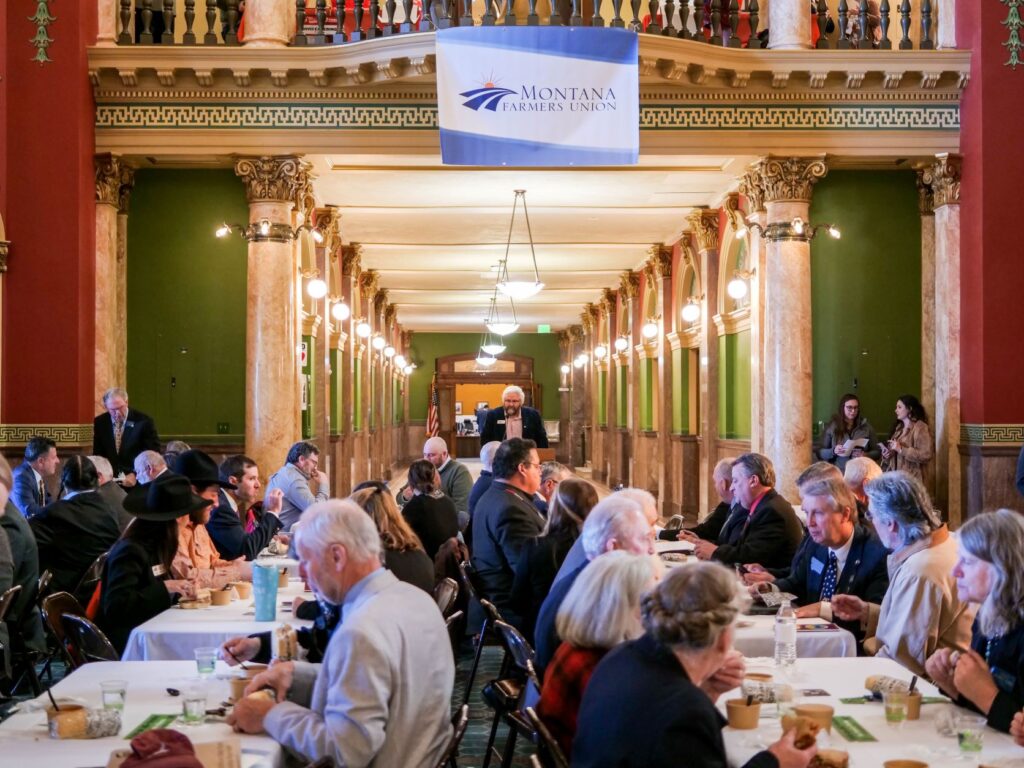 Montana Farmers Union members kept agriculture at the forefront of legislators’ attention during the first ever MFU Legislative Drive In held Jan. 3-4 in Helena.

The Drive In schedule included presentations from state ag department leaders, a lunch featuring Montana-grown foods in the rotunda, testimony on bills being heard in committee and time with legislators building rapport.

MFU President Walter Schweitzer said he was pleased by the reception members received at the capitol.

“Ag is our No. 1 industry and Montana Farmers Union is the largest and oldest farm organization that represents family farms, and I believe the legislators realize we play an important role in advocating for family farms, and they wanted to get to know us and hear from us”

The two days also were an opportunity to thank legislators for their efforts and to talk about what MFU does, including its 120-year history of grassroots advocacy for family farms.

“We’ve been around for 120 years doing what farmers need done so that they can feed you,” said Schweitzer, who is a third-generation MFU member.

“I just wish my grandparents and parents were alive today so I could thank them for the work they did to get Farmers Union started and organized,” he said.

During the event, MFU members spoke in person with state leaders about the organization’s priorities of Right to Repair, Data Harvest, Food Systems, Country of Origin Labeling and Ag Land Protection.

“The legislators want to hear from constituents, and this gave the opportunity for the MFU members to meet directly with their representatives. It gave an opportunity for the representatives to ask questions and communicate directly with their constituents – open a direct line of communication so that as the legislative session progresses, they know who to reach out to to ask questions and ask advice on how to vote on a bill,” Schweitzer said.

“The more people who can bring their specific angle on a piece of legislation, it weighs a lot better than just having a lobbyist say, ‘this is a good bill,’” MFU board member Erik Somerfeld said.

Attending the Drive In was a “no brainer” for Larry Robertson, who owns Flathead Lake Winery and offers free vineyard site assessments.

Robertson lobbied for different legislation last year and said the opportunity to come as part of a larger organization that has policy in place supporting Montana wineries is a “game changer.”

After a day of stumping for legislation to broaden opportunities for Montana vineyards and wineries, he said he was hopeful that legislators would pick up the cause.

“We could’ve never have done any of that without being here and being involved,” he said.

As an ambassador, I was able to witness our membership making real progress on the things they are working on to strengthen their own farms and communities which is truly the value of being a member of Montana Farmers Union,” MFU Ambassador Carissa McNamara said.

McNamara, who is also an MFU member, said she and other members were also able to hear what their representatives are working towards while sharing their own experiences.

“The Drive In opportunity created by MFU leadership got us in the room, and gave our membership a platform to have their voice and their niche of agriculture and community represented,” she said. “What a way to kick-off the new year!”