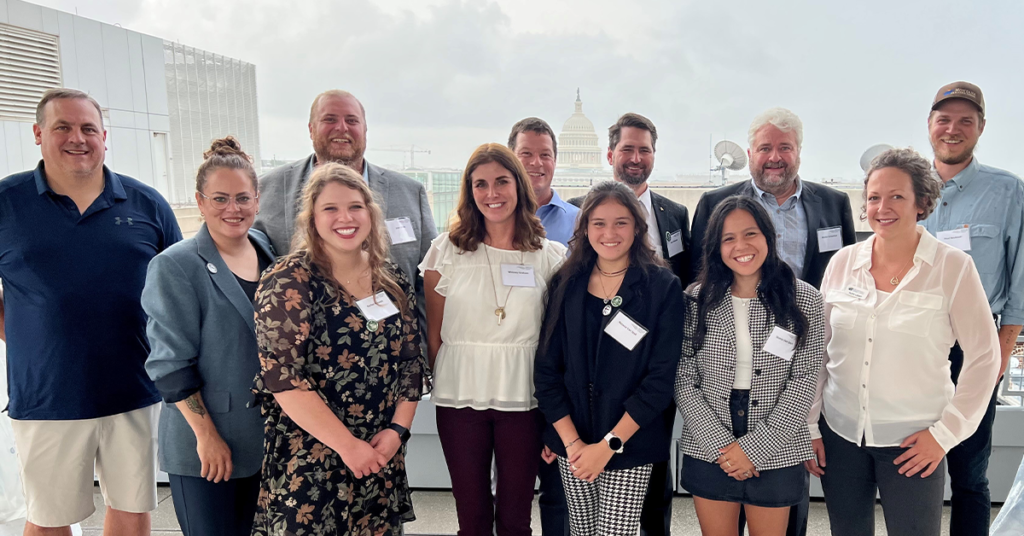 Fourteen members of Montana Farmers Union joined with more than 250 other producers from around the country for the event that featured briefings with the White House, the USDA and FTC, as well as in-person meetings with members of Congress.

“It was valuable to see first-hand how our laws are made,” Shania shares of the experience. “I learned a lot and met some very interesting people.”

Event attendees shared priorities related to NFU’s Fairness for Farmers Campaign, which launched last September and advocates for increased fairness and competition in agriculture markets. Priorities members shared with lawmakers included: support for the Meat and Poultry Special Investigator Act, the Cattle Price Discovery and Transparency Act, the American Beef Labeling Act, rulemaking by the USDA to strengthen the Packers and Stockyards Act, and support for right to repair legislation.

“I wish our grandparents could have been involved in this year’s NFU fly-in and seen the results of the work Farmers Union has been putting in for over 100 years”, MFU President Walter Schweitzer remarks.

Issues supported by the organization today have roots in the early days of the Farmers Union, when farmers formed the group as a means of advocating for fair market access.

“We heard from the DOJ and FTC on their work to enforce the laws of antitrust and Packers Stockyard Act and to share our stories of the many violations of these laws we are experiencing in the countryside.”

Next year marks a revamping of the Farm Bill, and producers and lawmakers already are talking about priorities, including strengthening the farm safety net, building upon conservation programs, and expanding and enhancing permanent disaster programs. MFU members were able to share those and other priorities for a strong Farm Bill during the Fly-In.

“After this week I am extremely proud to be a Farmers Union member,” Schweitzer adds, “We are being heard and there is hope that we can force the corporate monopolies to play fairly in the marketplace.”

Montana Farmers Union has worked more than 100 years for family farms, ranches, and rural communities. MFU supports its members through: Strong education programs for both youth and adults, by advocating member-driven policies and legislation at the state and federal level, and cooperation through producer-owned co-ops. For more information, visit www.montanafarmersunion.com.