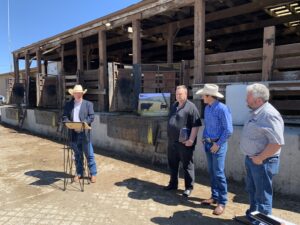 New, bipartisan legislation is aimed at examining anticompetitive practices in the meat and poultry industries. Sens. Chuck Grassley, R-Iowa, and Mike Rounds, R-S.D., are co-sponsors of the legislation. (Creative Commons photo via Pxhere)

When Jess Peterson of the United States Cattlemen Association was looking back at how long it has taken to get legislation on the meatpacking industry introduced, he was amazed.

In 1920, Congress had been concerned about the consolidation of power among meatpackers. At the dawn of the Warren Harding administration, there were five big packers, which caused lawmakers to fret about anti-competitive practices.

Today, 101 years later, Peterson said not much has changed. The number of packers hasn’t increased; in fact, there are only four major packinghouses.

“This beefs up the system,” Peterson said. “It gives the Department of Ag the ‘S’ word — a subpoena. More than that, it truly modernizes it.”

If passed as it currently stands, the law would fund a separate investigations unit within the United States Department of Agriculture that would then have subpoena power. Tester told a group gathered at the Public Auction Yards in Billings that subpoena and staffing are needed to spend concentrated time analyzing practices that are anticompetitive. More than that, Tester said with the last week’s ransomware attack on JBS, the nation’s largest meat supplier, it’s critical that there’s more transparency and accountability in the food supply system.

“If it happens to meat and JBS, it can happen to grain or dairy or any industry,” Tester said. He said the shutdown of food supply could cripple the nation.

Joe Goggins of the Public Auction Yards in Billings speaks on June 11, 2021 about legislation sponsored by Sen. Jon Tester to add a USDA investigative branch (Photo by Darrell Ehrlick of the Daily Montanan).

The concept is that an investigation arm of the USDA would be well positioned to look into issues and keep tabs on the meat and poultry industry. Joe Goggins of the Public Auction Yards said it’s akin to having a referee in the game.

“We’re good competitive citizens,” Goggins said. “The problem is at the highest level in the packing industry. This pieces gives us a referee who has a whistle and a flag to throw.”

The USDA with subpoena powers would then be able to share any anticompetitive and antitrust information with the Department of Justice, which would ostensibly be able to prosecute any violation of law.

“We believe that once you put evidence in front of (the Department of Justice), they will act,” Tester said. “This will provide evidence, transparency and openness and we’ll be able to apply pressure.”

The investigation arm would also provide a bridge for communication between the Department of Justice, Homeland Security and the Federal Trade Commission.

Representatives from Montana’s cattle and farming industry said they don’t mind healthy competition, but the oligarchy of a few huge packing companies isn’t fair to producers who assume all the risk only to have prices kept artificially low.

Criticizing the meat packing industry for “irresponsible consolidation” and saying it’s perpetuating a “broken system,” Tester pointed out that the four largest packing companies also operate 18 of the 20 largest packing houses, creating a near monopoly on the industry.

“If you add more competition, you will get a better price,” Tester said.

Walt Schweitzer of the Montana Farmers Union said that with foreign ownership of meat companies, it puts domestic supply of meat in jeopardy.

“This is about national security and the consumer,” Schweitzer said. “It doesn’t surprise me that this legislation is coming from Sen. Tester — he was my butcher before he was my senator.”