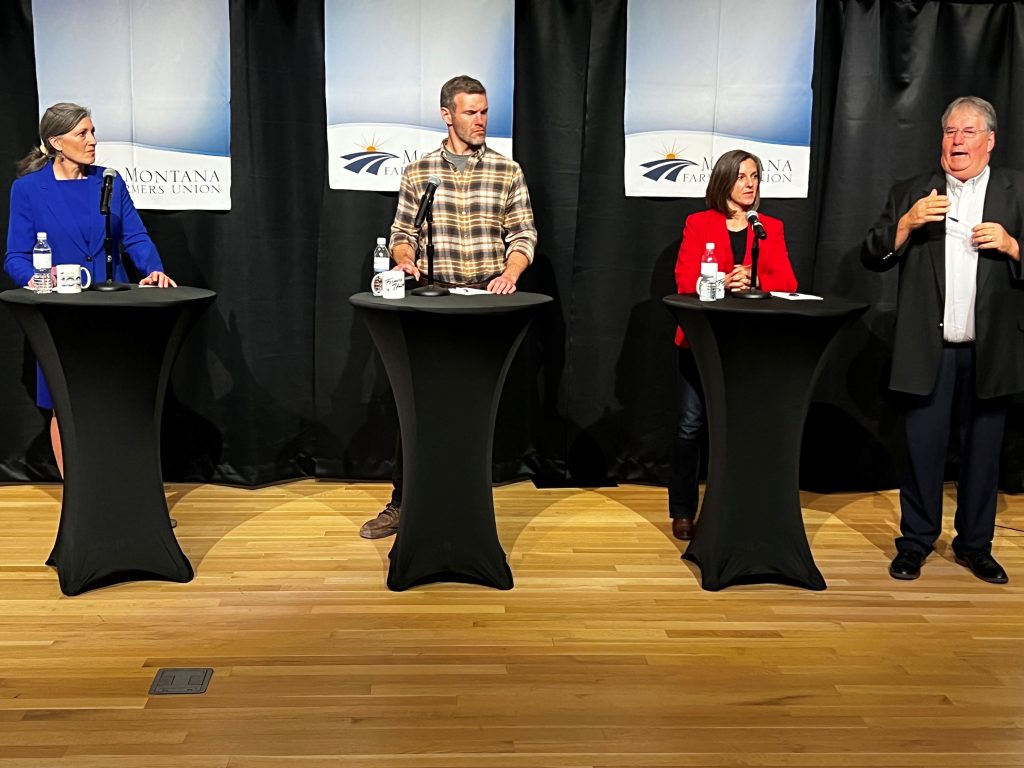 Cora Neumann, Monica Tranel and Tom Winter faced off for an hour during the Congressional Primary Debate co-sponsored by Montana Farmers Union and held in Inspiration Hall on Montana State University’s campus.

“I think we had a lot of good ideas, good answers to our questions,” MFU President Walter Schweitzer said.

“Montana Farmers Union is honored and proud to be able to take this opportunity to be able to educate the next member of Congress on what’s important to family farms and to rural Montana,” he added.
The candidates spent the evening tackling issues important to Montana’s No. 1 industry – agriculture – as well as to rural communities. Topics ranged from truth in labeling to right to repair farm equipment to broadband access to mental health services to childcare to the upcoming Farm Bill.

Issues such as the right to repair equipment, truth in labeling, and transparent cattle markets are results of too much consolidation, candidates said.

Schweitzer said it’s heartening to hear that candidates understand consolidation is strangling farms and ranches as well as consumers.

Candidates also agreed that education is important to the health of Montana communities and said teachers must be paid more – a sentiment Schweitzer shared saying that he wholeheartedly supports higher teacher pay.

“Education is one of Montana Farmers Unions core principles,” he added.
Schweitzer also said that the candidates’ understanding of agriculture is important to a strong economy and vibrant communities.

“It’s clear tonight in the answers that they gave that they realize the importance of agriculture to Montana,” Schweitzer said.

The final of the four-debate series will feature GOP candidates for District 1 and will take place at 7 p.m., May 20, at the Whitefish Performing Arts Center in Whitefish, with additional televised broadcasts at 10 a.m., May 21, on NBC and at 4 p.m., May 21, on ABC.

The event is open to the public and will be televised live on SWX and rebroadcasted on Cowles’ media affiliates ABC FOX and NBC in Montana and broadcast on Northern Ag Network’s affiliate radio stations.
The debate series is co-sponsored by Montana Farmers Union, United States Cattlemen’s Association, the Montana Cattlemen’s Association and the Northern Plains Resource Council.

More information, including videos of debates which have already aired live, can be found at https://montanafarmersunion.com/montana-debates.
###
Press Information: montanafarmersunion.com/media-press-kit/MFU President Walter Schweitzer: 406-799-3782
Montana Farmers Union has worked more than 100 years for family farms, ranches, and rural communities. MFU supports its members through: Strong education programs for both youth and adults, by advocating member-driven policies and legislation at the state and federal level, and cooperation through producer-owned co-ops.