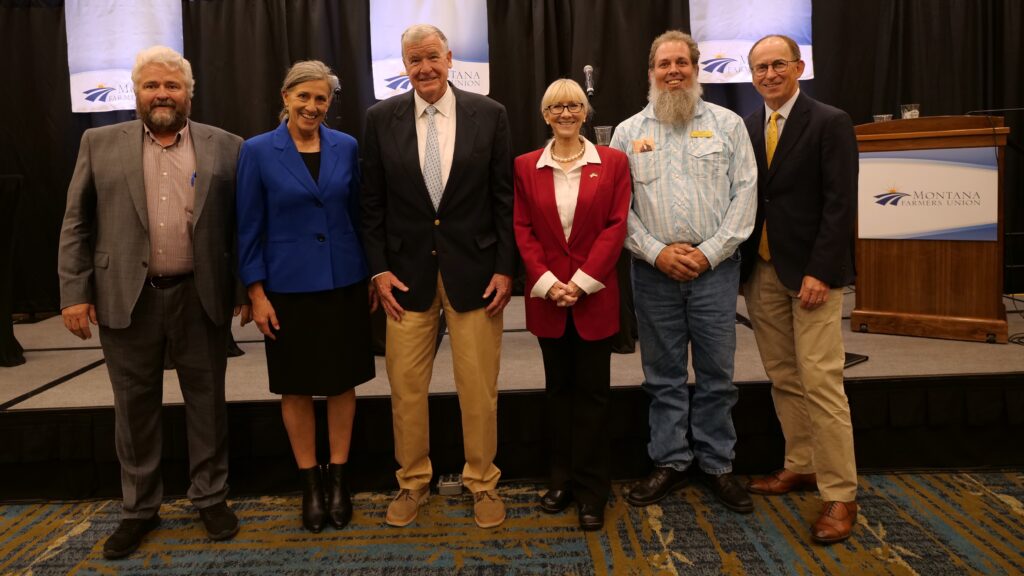 HELENA – While they had different approaches, Congressional Candidates agreed that corporate consolidation, right to repair and country of origin labeling are all issues that need to be tackled.

Monica Tranel, Penny Ronning, Gary Buchanan and John Lamb shared their thoughts on those and many more issues during an hour-long Town Hall, which was moderated by Mike Dennison and sponsored by Montana Farmers Union and held as the conclusion to the organization’s 107th annual convention in Helena.

All candidates for Montana’s two Congressional seats were invited to the event. Republicans Ryan Zinke and Matt Rosendale and Libertarian Sam Rankin did not attend, and the other candidates did not miss the opportunity to negatively remark on their absence.

The forum provided an opportunity for voters to see differences between candidates on the home stretch before Election Day.

“It will give the voters a chance to vote for the candidate who most represents their values and their concerns,” MFU President Walter Schweitzer said.

“Voters are taking every opportunity they can to hear what the candidates are talking about to understand the values of the candidates,” Schweitzer said.

He added that Rosendale and Zinke’s attitudes toward voters by only showing up to two debates this election cycle is “dismissive” and frustrating.

When it came to the issues, Lamb said he would avoid more mandates from the federal government, and instead turn to local and state leaders to fix issues.

Buchanan, Ronning and Tranel all said they would pursue various avenues to make sure producers have access to fair markets, improve truth in labeling and support right to repair.

Whoever Montanans send to Washington will hit the ground running into the Farm Bill’s renewal next year.

When it comes to the Farm Bill, Lamb said he would support a Farm Bill that would protect small producers and put control back to free market.

Buchanan said a comprehensive Farm Bill is needed and that he already is speaking with industry experts to learn more about the issues.

Tranel said she supports the SNAP and fair market for producers, pointing to her career history of fighting against corporations. She said she has also heard from Montanans that they are interested in crushing facilities and whether or not hemp can be covered by crop insurance.

For Ronning, climate change issues are a large part of the Farm Bill, as well as supporting SNAP, fair market prices and ensuring that farmers and ranchers are protected.

Schweitzer said sponsoring the event was a good fit for MFU, which also sponsored a series of primary debates earlier this year.

“Montana Farmers Union wants to take every chance that we can to educate our leaders and our neighbors about issues that are important to the family farm,” he said.