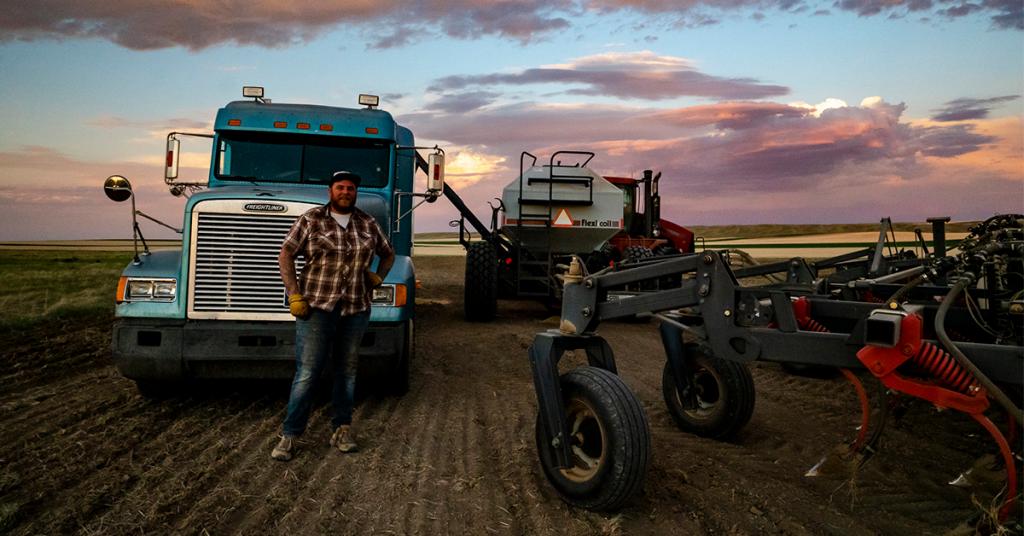 Tiber Ridge Farm, settled in the Golden Triangle near Chester, is owned and operated by John Wicks and Gwyenth Givens. John moved back to the farm at the age of 21 in 2005 after his dad passed away. Tiber Ridge, once a conventional farm, is now certified organic. Conventional farming utilizes chemical fertilizers to stimulate crop growth. Organic farmers rely on biodiversity and composting to capture carbon and improve soil health. Wicks has found success raising beluga lentils, a high-dollar crop, which helps improve soil health. He also grows einkorn wheat, an ancient grain, the oldest domesticated wheat globally that is very drought tolerant. “We were trying to keep ahead of a system that was seeming to be favoring corporate farms and large-scale operations. We decided to transition the whole farm to organic. It is a lot easier to turn a profit, even though it was a little more work and a lot more management. We are having a lot of fun farming again. We continue to learn and grow with an open mind.”

The Transition to Organic

Wicks and Givens use farming techniques that trace back a millennia ago to fight weeds and pests by crop rotation and cover crop mixes to improve soil health.  The transition from conventional to organic can be overwhelming for some, and the farming practices are somewhat different. Wicks said the key to success with organic farming is patience and perseverance. “I think everybody’s so afraid of those first three years that it takes to transition. I thought we would be just barely holding on for those three years, but the amount of money we saved on inputs made those years profitable even without getting the organic price. Now that we’re certified organic on every crop, it’s pretty nice to know that you’re still making money on a crop like a winter wheat. I think ours went $10 a bushel this year. And for the price that I’m getting, I’m still making $14 an acre.”

A good majority of farmers in the Golden Triangle are conventional. Part of the thinking to switch to organic was to increase profitability, help mitigate climate change and improve soil health. “If we can get away from fertilizers, it reduces input costs, and we can grow a crop that fixes nitrogen, cycles nutrients, and sequesters carbon. Cover crop mixes are fairly expensive, but they are about half of what I spent on fertilizer. I’m not getting quite the nitrogen return as if putting in fertilizer, but it’s a system we believe in. All these big companies are telling you to use chemicals as a quick fix instead of addressing the problem in the field. The other advantage of organic farming is being able to pay down long-term debt that felt insurmountable before.”

The difference in Process Between Conventional and Organic

The seeding for organic crops and harvest is later than for conventional crops. “We’re pretty conscious about our tillage. Pre-plant tilling is all we do. We’ll run a high-speed disc over it in the spring, followed by a duck foot type field cultivator. It was a challenge at first to get the different pieces of equipment. Seeding is a little later than conventional crops. That’s where we get nutrient packages that help with water retention and holding capacities. In a drought, we can tell where we have built-up moisture by raising that organic matter in the soil.”

John and his wife Gwyenth are members of Montana Farmers Union and participants in the Farmers Union Enterprise Leadership program (FUEL), along with member Paul Neubauer of Havre. The FUEL program empowers future Farmers Union leaders in Montana, North Dakota, South Dakota, Minnesota, and Wisconsin with a series of hands-on training to enhance their knowledge of cooperatives and the Farmers Union’s role. The first FUEL training was in South Dakota. “It was neat to see different types of agriculture in a given area and how they do things. It was pretty interesting.”

Wicks also served on MFU’s policy committee for the 2020 state convention. He says it’s more important more than ever to be involved in a farm organization like MFU. “It helps you stay positive, knowing that all of these people together have more of a voice. And when you’re just out there farming on your own, like I thought I was too busy to be involved in farm organizations, but when you get to be a part of it, you get to see how hard everybody’s working for it. You feel like you’re not out there just on your own, just hoping for the best. It’s a community of people willing to help you.”

Wicks is interested in ways we can adapt our farm practices to help mitigate climate change. He would also like to see more innovation in crop insurance to cover companion crops. He supports the farmers’ right to repair their equipment and measures to fight corporate consolidation to help save the family farm. For every aspect of agriculture, if we hold the big companies accountable, it will give the farmer more bargaining power.”